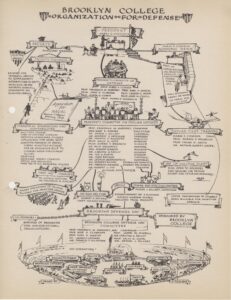 Organization for Defense flowchart from the Annual Report of the President 1940-1941. Brooklyn College Archives.

War preparations at Brooklyn College began well before Pearl Harbor. As early as 1940, BC President Harry Gideonse created faculty committees charged with coordinating defense-related activities and monitoring changes to the Selective Training and Service Act of 1940 (the draft).1  Spurred by a July 1940 Board of Higher Education resolution creating a committee consisting of the four college presidents “to consider the contributions which the colleges may make toward the national program of industrial and military preparedness,”2 Gideonse had official backing to move the Midwood campus towards war readiness.

An advocate for America’s involvement in WWII, Gideonse’s rising reputation as a leading voice in modern higher education gave him the ability to lobby on both the local and national levels. He and Brooklyn Dodger manager Larry McPhail co-chaired the Brooklyn Chapter of the Committee to Defend America in Aiding the Allies. Speaking throughout the borough, they called for military aid to Britain and an end to isolationism.3 In print and on radio, Gideonse attempted to sway American sentiment towards military aid. He also spoke out against the passage of the Ludlow Amendment at a 1939 Senate hearing. If passed, the power to declare war would have moved from Congress to a popular vote, something Gideonse believed would render American diplomacy useless and encourage fascist aggression.4 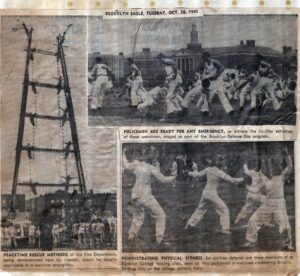 For Gideonse, the college had a responsibility to prepare both its students and the surrounding community for an unavoidable war. To this end, a Civilian Defense Day was held on October 27, 1941, on the Brooklyn College athletic field. Politicians, civic leaders, and NYC public school students gathered to watch Brooklyn College undergraduates demonstrate physical fitness exercises developed by former heavyweight champion Gene Tunney, the Athletic Coordinator for the Naval Air Service. Local police, firefighters, and military units also performed war readiness drills.5  NYC Mayor Fiorello LaGuardia, BC President Harry Gideonse, and Brooklyn Borough President John Cashmore spoke at the event. The Mayor’s speech included a somber warning to the attendees. According to LaGuardia, enemy planes could easily cross the Atlantic Ocean: “There is no telling when or how we may be attacked. We are dealing with a ruthless, greedy, and irresponsible individual who did not hesitate to plunge most of the world into war.”6

To prepare for possible air attacks on campus, faculty and staff received training from local police precincts and fire stations to become air raid wardens and auxiliary firefighters. Trucks containing sand and firefighting equipment were placed at the main entrance of each building. Fire hoses, sand, asbestos gloves, and other equipment for fighting incendiary bombs were placed inside each building near the roof. All campus buildings had first aid supplies, and an emergency hospital was set up inside the Gymnasium Building (Roosevelt Hall). 7 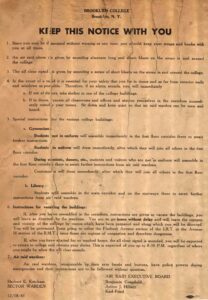 On October 29, 1941, BC became the first college in New York City to conduct an air raid drill and an evening blackout. During the blackout drills, facilities personnel turned off all of the lampposts on campus, and all lights visible from building windows were concealed to prevent enemy planes from locating the campus.8 In January 1942, a ship’s siren operating with 125 pounds of steam pressure was installed on the smokestack of the Heating Plant. The siren, which could be heard for five square miles around the college, would be sounded in the event of an attack.9

Not all of Gideonse’s war preparation plans for the college were successful. Gideonse failed to get government approval for an ROTC unit on campus despite two attempts. Calls by students to establish ROTC at BC began in 1937 during the Boylan administration. Fears that ROTC would lead to the suppression of left-wing groups, combined with charges of anti-Semitism and the pacificist sentiment among the students, nixed this early bid.10 In 1938, the BC Faculty-Student Committee on Student Activities temporarily prevented the formation of the Club for the Establishment of an Elective ROTC at Brooklyn College, arguing that the student club possibly violated a clause of the McGoldrick resolution barring military or semi-military organizations from campus.11  After a formal review, Faculty Council permitted the ROTC club to operate on campus. In February 1940, the ROTC club appealed to the Board of Higher Education in an attempt to reverse Faculty Council’s vote against establishing a military science department and ROTC unit at BC. 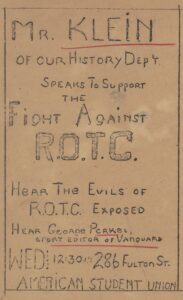 Anti-ROTC flyer. Records of the Office of the President, Brooklyn College Archives.

In its decision, Faculty Council cited high costs and the lack of proper facilities at BC, concluding that it “is debatable whether military training in a liberal arts college, ever, anywhere, makes a contribution to national defense.” Furthermore, they added that during peacetime colleges should “pursue their proper functions without attempting to participate in activities unrelated to their proper ends.”12 By the summer of 1940, the Board of Higher Education urged Faculty Council to reconsider its decision. Gideonse also argued that ROTC was needed in light of the changing international situation and fit with other defense activities already in place at the college. Under pressure, Faculty Council agreed to an ROTC unit on campus.13 Gideonse submitted applications for a Naval ROTC in October 1940 and an Army ROTC unit in December 1941. The War Department denied both requests.14

While Gideonse pushed for an end to American isolationism, he did not have the backing of the entire student body. The American Student Union (ASU) was particularly vocal in its opposition to any war preparations on campus. Formerly a coalition of communist, socialist, liberal, and New Deal students, the ASU was reduced to only communist students after a December 1939 vote at the ASU’s national convention endorsing strict neutrality and support of Soviet foreign policy following the Molotov-Ribbentrop Pact. However, when Germany invaded the Soviet Union in June 1941, the ASU changed its tune and agreed with Gideonse that America could no longer remain neutral.15 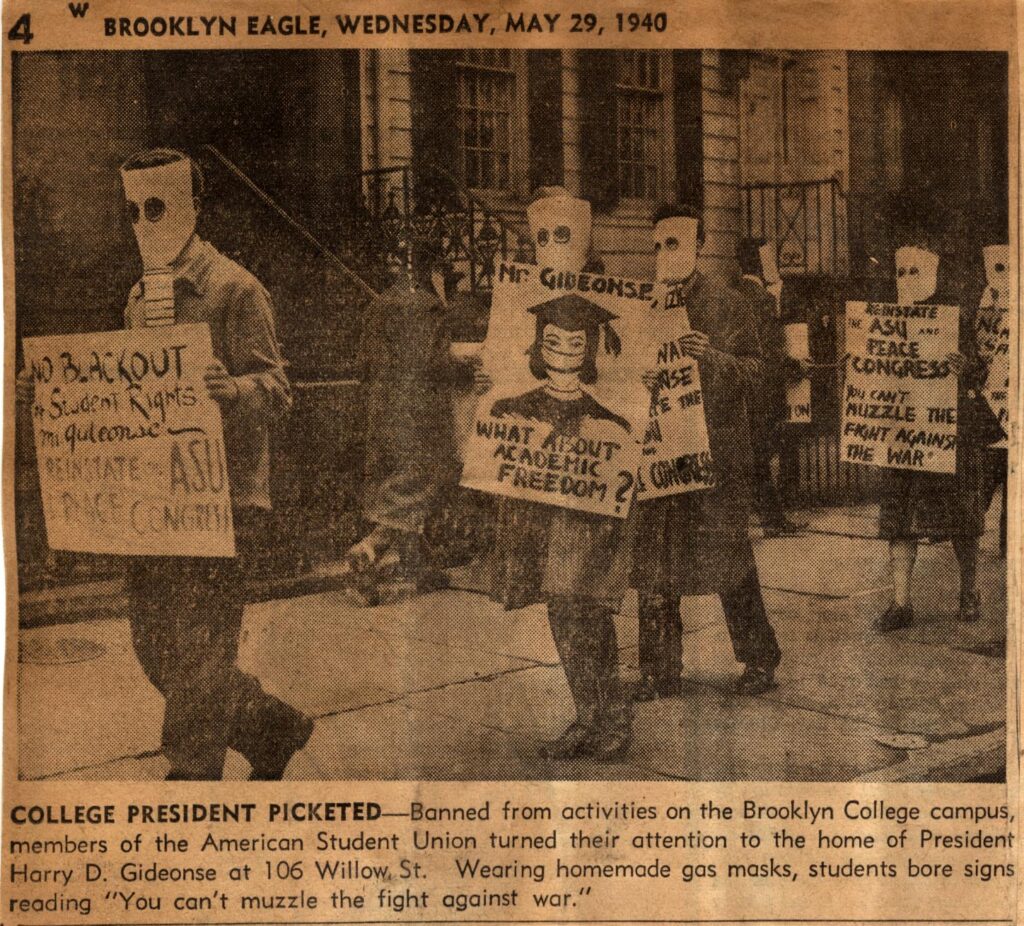 “You Can’t Muzzle the Fight Against War.” On May 29, 1940, gas mask-wearing members of the American Student Union picketed President Gideonse’s home in response to a decision by the Faculty-Student Committee on Student Activities to temporarily ban the ASU from holding meetings or distributing flyers on campus. The ASU was banned after the club held an “unauthorized” peace strike on the quadrangle. Photo courtesy of the Brooklyn Eagle.

Gideonse’s extensive war planning received national attention, and on November 13, 1941, he spoke before the Commission on Higher Education and Civilian Defense in Washington.16 On December 14, 1941, the New York Times reported that “Brooklyn College’s plan for defense has become a model for hundreds of colleges throughout the country.”17 The pre-war preparations laid the groundwork for a comprehensive program which included new classes added to the curriculum and changes to grading and graduation requirements to meet the needs of students going to war. 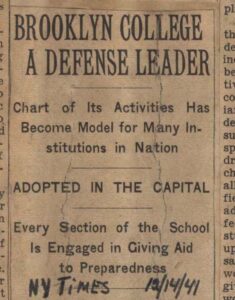 2 President’s Advisory Committee on Defense, Box 477, Folder 15, Records of the Office of the President, Brooklyn College Archives and Special Collections.

11 Letter from Mario Cosenza to John Whyte, Box 242, Folder 3, Records of the Office of the President, Brooklyn College Archives and Special Collections. Note: Approved by the Board of Higher Education on January 17, 1938, the McGoldrick Resolution was a victory for left-wing student organizations, such as the American Student Union, who were seeking official recognition on the municipal college campuses. The resolution provided guidelines for the establishment and possible disciplining of student clubs. The clause in question read: “No organizations, military or semi-military in character, not connected with established college courses shall be permitted without the authorization of the proper faculty and the Board.”  For the full text of the McGoldrick Resolution, see Article VII-Sections 2 and 3, Proceedings of the Board of Higher Education, January 17, 1938. Note: When the McGoldrick Resolution was passed, City College was the only college in the municipal system to have an ROTC program. This program began during WWI.

12 Minutes of the Meeting of the Faculty Council of Brooklyn College Held on February 8, 1940, Box 242, Folder 3, Records of the Office of the President, Brooklyn College Archives and Special Collections.

15 A detailed history of the American Student Union can be found in Robert Cohen’s When the Old Left Was Young, Oxford University Press, 1993.