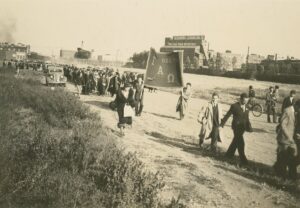 On October 2, 1935, a procession of students, faculty, administrators, and civic leaders marched onto the Midwood Campus for the Groundbreaking Ceremony.  President Boylan declared the day a half holiday so students could attend. The student procession is described in great detail in the 1936 Broeklundian: “Taking their initial possession of the rather stubby grounds, soon to be transformed into a shaded quadrangle, the sun shining on their proud heads, the students trooped about the field in a procession. Led by their marshalls, professors in academic robes, they arrived at the speaker’s rostrum singing that soon-to-be-outmoded marching song, ‘From the Portals of Joralemon.’” 1

Celebratory speeches were given by many dignitaries including Mark Eisner, the Chair of the Board of Higher Education; Brooklyn Borough President Raymond Ingersoll; President William Boylan; and Mayor Fiorello LaGuardia. 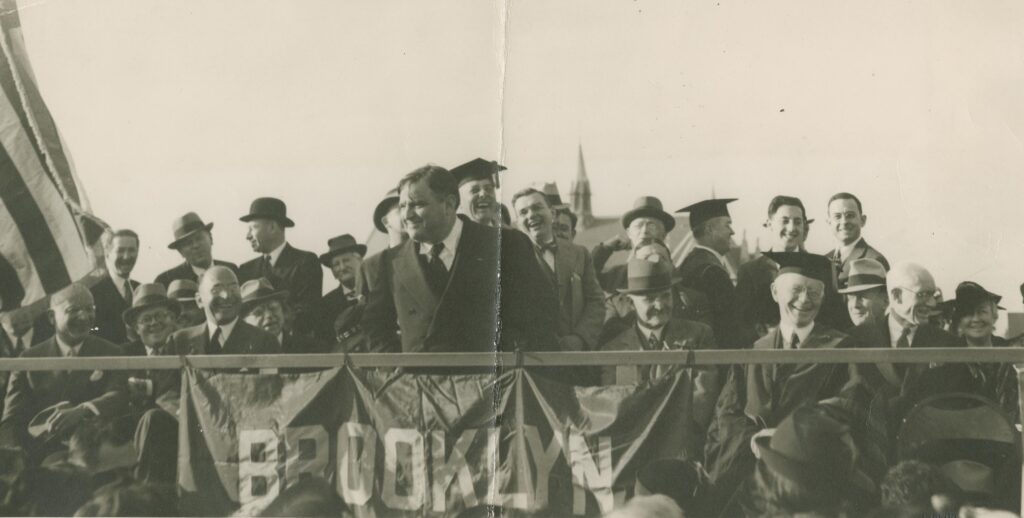 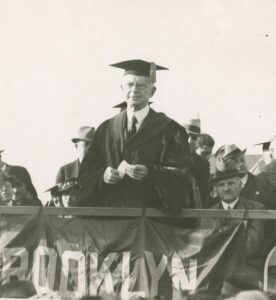 President Boylan summed up the importance of the event, the culmination of a nine year battle to get a campus: “I have never met an occasion when I have found it more difficult to speak. I can say nothing. A parent who has carried on through thick and thin for his children’s sake does not have to say anything for them, when he sees them win the success he hoped for them. His bearing, his manner and expression say more than words. My heart is full.” 2

The highlight of the day was when Mayor LaGuardia ceremonially broke ground at 4:15 pm, symbolizing the start of construction.  The New York Times reported how the large crowd interfered with this historic event:  “The Mayor had difficulty in the actual ground-breaking, barely succeeding in inserting a spade into the topsoil, because of the pressure of the crowds of students, whom the police were unable to keep back.” 3 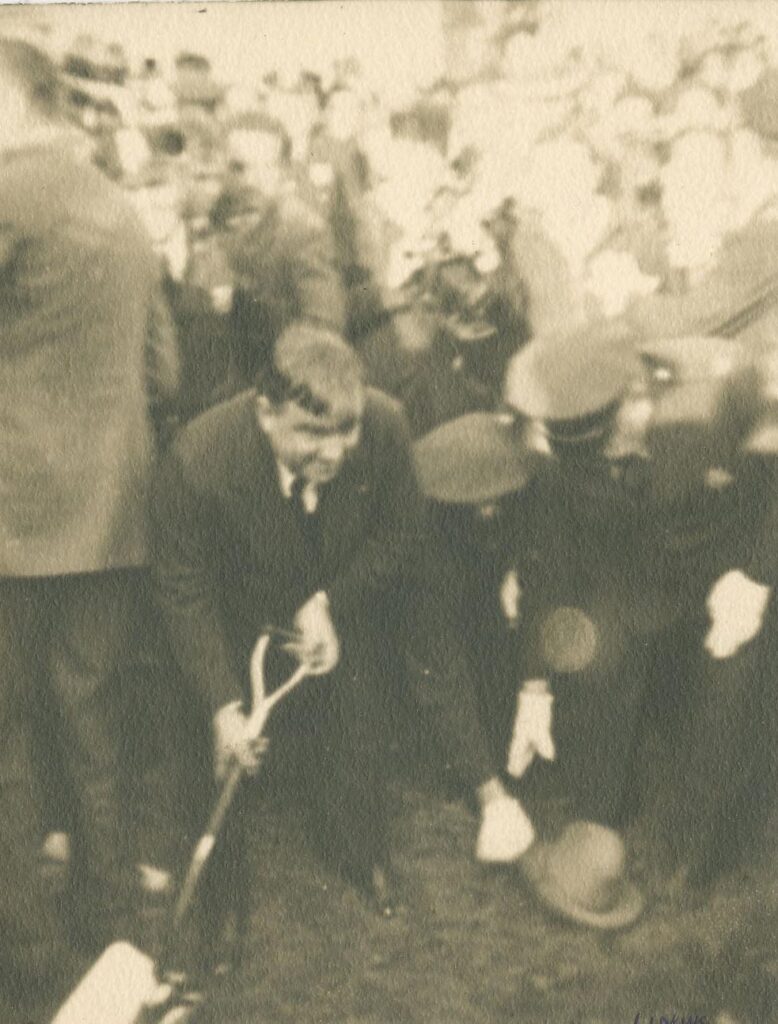 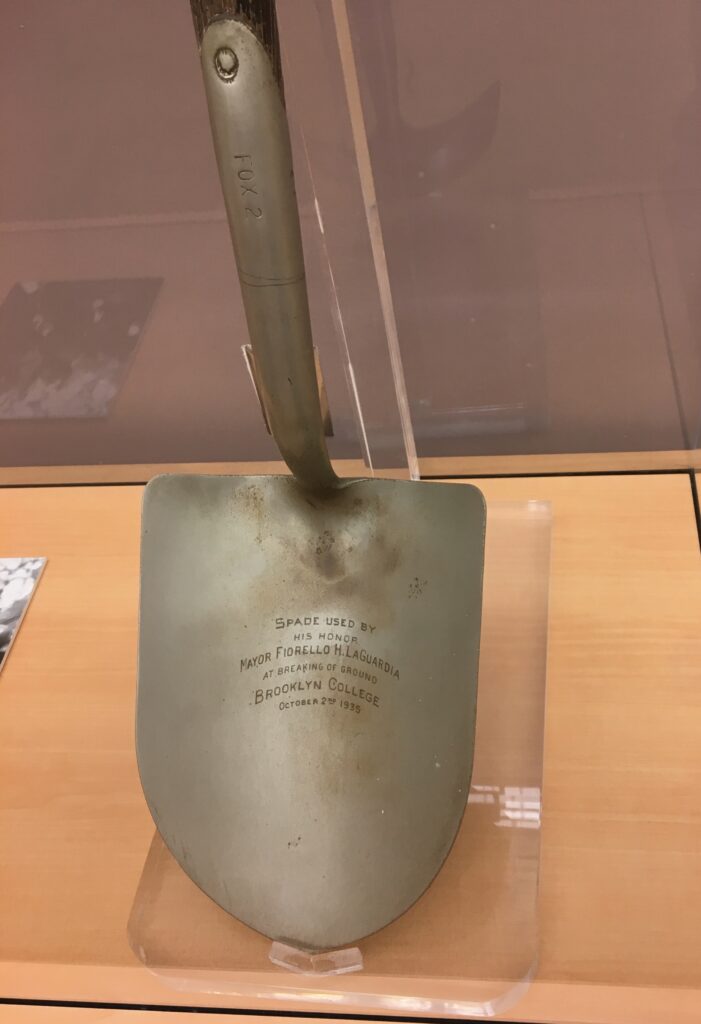 The spade used by Mayor LaGuardia is on display in the BC Library. 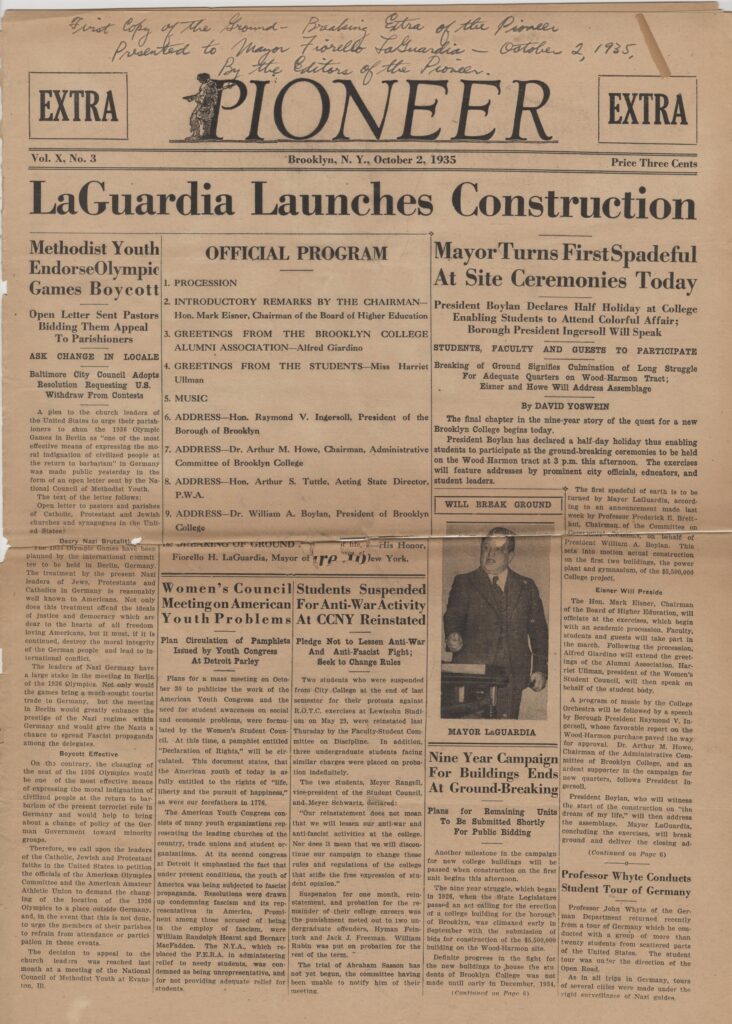 The song “From the Portals of Joralemon,” is sung to the tune of the “Halls of Montezuma.” The lyrics are filled with the trials of getting from one building to another in downtown Brooklyn. The first verse of this song is as follows:

From the portals of Joralemon

To a class at Willoughby,

Then we tramp out once again, what fun to Pearl for history.

Through a maze of trolley cars we dodge,

Right by traffic cops we charge—and take our chances—

From the portals of Joralemon

To a class at Willoughby. (1934 Freshman Handbook, Brooklyn College Archives.)