The Search for a Campus 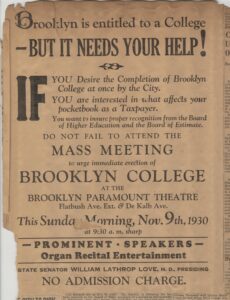 On November 9, 1930, more than 200 members from civic groups representing Sheepshead Bay, Flatbush, Brighton Beach, and Coney Island met at the Brooklyn Paramount Theatre and adopted a resolution urging the Board of Higher Education to choose the land on Ocean Parkway near Lincoln High School as the permanent home for Brooklyn College.  As with the advocates of the approximately 40 other proposed sites, the rhetoric was the same: their location was the most suitable, the most affordable, and would provide jobs for thousands of unemployed New Yorkers. 1

Yet a decision by the city on a location for Brooklyn College would not be made for five more years.  The long and heated battle began four years before with the passage of the Nicoll-Hearn Bill of 1926 that created the Board of Higher Education. One of the charges of the newly created Board was to find a site for a college in Brooklyn.  Politics, lawsuits, and financial woes stalled the process as the nascent college tried to make the best of the increasingly crowded and inadequate rented space in downtown Brooklyn.  Finally on August 30, 1935 the city purchased the Wood-Harmon tract that would become the Midwood Campus. But the opponents would not go down without a fight, jeopardizing FDR’s Public Works Administration loan.

In 1926 the Board of Higher Education set up a Committee on Brooklyn Facilities to not only see to the needs of the rented office space in downtown Brooklyn but also to search for a permanent home in Brooklyn for a collegiate center. As early as November 1926, the Committee reported favorably on the Prospect Park Reservoir. The Reservoir met all the committee’s criteria: accessibility by transit, proximity to auxiliary educational facilities, cost (free: the city owned the land), a good size, a quiet neighborhood, and speed of construction. The Board had also successfully negotiated cooperative educational agreements with the Brooklyn Museum, the Brooklyn Botanic Garden, and the Brooklyn Public Library. 2 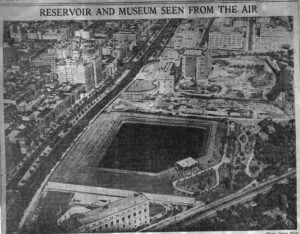 In March 1928 a formal application for the transfer of the property was sent to the Sinking Fund Commission that was then referred to the Comptroller.  However, in July 1929, John Deitz, the Commissioner of the Department of Water Supply, Gas, and Electricity, stated that the Reservoir would be needed for approximately six more years, making the land unavailable. The city’s Chief Engineer William Bush agreed, stating that the Reservoir was vital to the water supply in Brooklyn and Queens. 3  Despite this setback Prospect Park would stay in the running well into 1935.  While the free Reservoir land made the location desirable, it would be the high cost of the Board of Higher Education’s next choice which led to years of debate and delay.

In early October 1929, the Board of Higher Education informed the NYC Board of Estimate that they had chosen the Wood-Harmon tract of land in Midwood as the site for Brooklyn College.  Approval by the city was delayed as members of the Board of Estimate balked at the $4.75 million price tag, while Mayor James Walker hinted at negotiations with the owners of a more affordable alternate site. 4

With the stock market crash on October 29, 1929, plunging the nation into the Great Depression, spending millions on a campus was temporarily put on hold.  In January 1931 the Brooklyn Facilities Committee restarted the process by submitting to the Board of Estimate the results of its two-year study of suitable locations in the borough.  While the Committee still favored Wood-Harmon, it recommended two other sites with smaller price tags: land in Bensonhurst along Gravesend Bay and the above mentioned Ocean Parkway lot. 5

After a public hearing on the three locations that May, the Board of Estimate asked City Planning Commissioner John Sullivan to study and report back on the three sites.  A month later Sullivan announced that the Wood-Harmon tract was indeed the best location, and that if Controller Charles W. Berry could not negotiate a better price, then the matter should be returned to the Board of Higher Education. 6  Throughout June Comptroller Berry negotiated with all three owners, while supporters and detractors of each location made their opinions known; others even suggested new locations. 7

At the June 1931 meeting of Deutscher Verein, the German Club of the BC’s Women’s Division, a small group of faculty sang about the seemingly endless delay in choosing a campus.  Sung in German to the music of Robert Stolz’s “Two Hearts in 3/4 Time,” the satirical lyrics were translated into English as follows: 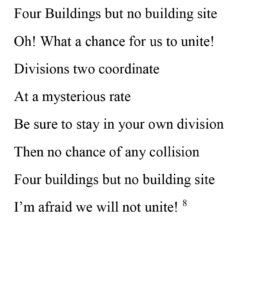 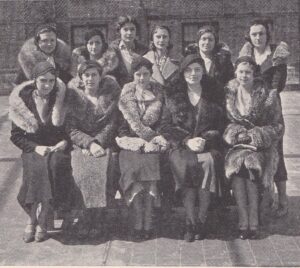 Members of the Deutscher Verein from the 1932 yearbook. Brooklyn College Archives.

In September 1931, Berry reported on five possible sites: Marine Park, East New York, Wood-Harmon, Bensonhurst, and Ocean Parkway, and declared that all the sites were too expensive. A month later Berry resurrected the idea of the Prospect Park Reservoir if the Department of Water Supply, Gas, and Electricity would release the land to the city within 18 months. 9

Despite being mandated by law to build the college, Mayor Walker announced on October 14, 1931 that the Board of Estimate was deadlocked over spending millions for Wood–Harmon at a time when funds were needed to help the unemployed. 10 Later that month the Harmon Corporation lowered the price of their Midwood property to $3.5 million. In an attempt to sway city officials, Board of Higher Education Chair Moses Strook and Commissioner Sullivan suggested that part of the Wood-Harmon land could be used for building a much-needed high school. Sullivan estimated that if the cost of buying property for the high school were subtracted from the lower Wood-Harmon price, the actual cost to the city would be reduced to $2.6 million. 11  This is the first official mention of what would become Midwood High School. 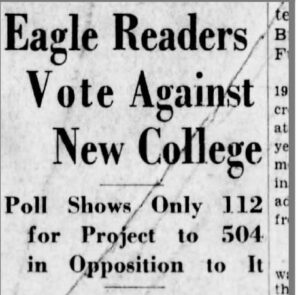 The search did not fare any better in 1932 and was further hampered by the resignation of Mayor James Walker in September 1932 over allegations of corruption. But in 1933, real estate mogul and daredevil aviator Burke Harmon went on the offensive.  Burdened by tax bills for a property he could not sell, Harmon offered a plan to the city:  his company would erect five buildings on the Wood-Harmon site and the city would pay annually the same amount in rent that they were currently paying for the buildings in downtown Brooklyn.  After 45 years, ownership of the land and the buildings would transfer to the city. 13 This deal seemed promising. The Board of Higher Education, the Board of Estimate, Borough President Raymond Ingersoll, and BC President William Boylan all supported the idea. 14

Even before the Board of Estimate’s December vote on the Wood-Harmon installment plan, opponents of the deal were firing warning shots across the bow. Joseph Goldberg, a prominent NYC attorney, warned that he would demand a state investigation if the Board of Estimate approved the purchase of Wood-Harmon. The Vandeveer Park Civic Association went further and filed a brief with Mayor-elect Fiorello LaGuardia claiming that the cost was too high and that “the city should not be the sucker for any realty group.” 15 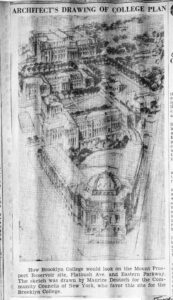 Two lawsuits were subsequently filed, but were dropped once it was revealed that the current lame-duck Board of Estimate would not decide on Brooklyn College but would leave the decision to incoming Mayor LaGuardia’s new Fusion-Republican Board. 17  To help their cause, the Community Councils of New York published a sketch of what the college would look like in Prospect Park. 18  However, economics prevented a decision on the new Mayor’s part, something he alluded to when he spoke at the 3rd Brooklyn College Commencement on February 14, 1934.

In his speech, LaGuardia described the current rented quarters as a “dilapidated shack,” but unfortunately Tammany mismanagement of city funds had left the coffers dry. He stated, “As soon as we can replenish what has been taken away from the city we will begin building.” 19

A poignant exchange between the Mayor and President Boylan has been recorded only in the student newspapers and the 1934 Broeklundian. According to the Brooklyn College Pioneer Boylan asked the Mayor about college construction: “In referring to his hope for the Mayor’s fullest cooperation, the President placed his hand over his heart and said he appealed to the Mayor’s heart, la corda. In his reply, Mayor LaGuardia’s first remark was that it was not la corda which counted, but la tosce (the pocket) which alas! was empty.  He [LaGuardia] illustrated this vividly by pulling out the lining of an empty pocket.” 20

In April Maurice Davidson, the Commissioner of the Department of Water Supply, Gas, and Electricity, gave hope to those who wanted the college built in Prospect Park when he announced that he was ready to hand over the Reservoir site to the city. 21  However, city officials still favored Wood-Harmon, and in June New York City Comptroller Joseph McGoldrick submitted to the Federal Emergency Administration of Public Works a loan application for $5.5 million to build the college. A month later a sketch of the Midwood Campus, which had been sent with the loan application, appeared in the Brooklyn Eagle. 22

In December, the Harmon Corporation lowered the price of the Midwood land to $1.6 million 23 leading the way for the December 21st approval of the site by the Board of Estimate. The Board did not formally approve the $1.6 million price, but took an option on the property. The option to buy would expire on July 1st as the city was waiting on the approval of the New Deal loan.  It was also announced that a high school to ease crowding in the area would be built on the property. 24

In June the city received the news it was waiting for: a $2,475,000 grant approved to build five buildings. The remainder of the construction costs would be obtained from a low-interest Public Works Administration loan. With this news, the Board of Estimate agreed to buy the Wood-Harmon land for $1,625,528. But the Community Councils of New York would not go down without a fight and they filed a lawsuit to prevent the purchase. 25

At first, it seemed that the law would be on the college’s side when Supreme County Justice Church refused to grant the Community Councils an injunction to stop the city from buying the land. He stated: “There is no evidence of fraud or collusion, bad faith or illegality on the part of the administrative officers in the proposed acquisition of a site for a college in Brooklyn. The foundation of a college and the selection of a location are matters for the administrative not the judicial branch of the government.” 26 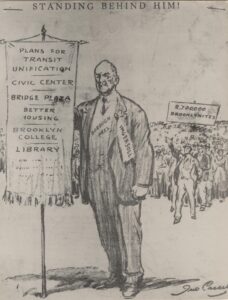 But on August 29, the Community Councils appealed the injunction and received a stay granted by Justice Francis Martin of the Appellate Division.   The next day, Justice Martin met with Borough President Ingersoll and Corporation Counsel Paul Windels. After the meeting, he vacated the injunction he had issued the day before. Finally, the city could deliver the check to the Greater New York Development Company (a subsidiary of the Harmon Corporation). 27

Although the temporary injunction was denied, the suit was still on the calendar, threatening the PWA funds and loan.  At first the attorney for the Community Councils stated that his clients did not want to dismiss the case, but at the “eleventh hour” on November 7th, the day by which the city had to notify the federal government that no lawsuits were pending, the plaintiffs withdrew their suit, and the Federal Government was notified. 28   Construction could begin, and a celebratory Groundbreaking was held on October 2, 1935.

4 “Secret Survey Delays Picking of College Site,” Brooklyn Daily Eagle 7 October 1929: 1. Note: The Board of Estimate was the main governing body in NYC from 1901 until 1989 and at this time included the Mayor, the Comptroller, the City Council President, and the five Borough Presidents.