The City and Hunter Branches

When the newly created Board of Higher Education met for the first time on May 26, 1926, Chairman M. Philip Sinnott clearly stated its main mission: “the immediate business requiring the attention of the Board is to proceed to make the establishment of the Brooklyn Center effective.” 1  To that end, a Brooklyn Center Committee was formed to oversee the renting of space, the buying of equipment, and the hiring of a teaching staff. The Brooklyn branches of City College and Hunter College opened four months later just in time for the fall 1926 semester. The classes offered were for freshmen and sophomores only.  Students had to transfer to the main campus of their respective college to complete their degree. 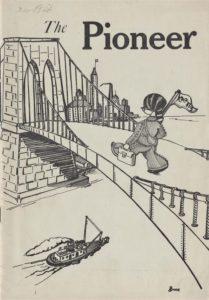 Cover of the November 1926 issue of the Pioneer showing a CCNY student proudly crossing into Brooklyn (Brooklyn College Archives).

Since City and Hunter Colleges were not co-ed, neither were their Brooklyn branches. Although at times they might have occupied the same building, the units were distinct with their own classes, faculty, and degree requirements.  Hunter and City students were only allowed to travel to the floors occupied by their college and the men and women could not even speak to each other in building lobbies. One woman was almost suspended because she had dared to speak to her brother in the lobby of the Willoughby building.  Adele Bildersee, the Dean of the Hunter branch, stated “if the girls want to meet the boys for a good business reason, we can arrange a meeting in my office.”  The Dean did hold these meetings on several occasions, but only after the women received her permission to send a formal letter of invitation to City students. 2

In the fall 1926, registration totaled 5,593 students with the majority of the students attending class in the evening. 3   Each year enrollment rose and the Board of Higher Education scrambled to find more space for students, faculty, and administrators. While the 3rd to the 10th floors of 80 Willoughby Street were adequate for the first semester, by spring 1927 additional space was needed. A rental agreement was made to rent six floors at 66 Court St and the Hunter students were moved there, even though the delivery of some furnishings and lab equipment was delayed and not installed in time for classes. By 1929, seven floors at 383 Pearl Street and additional floors in the Willoughby building were also rented. 4 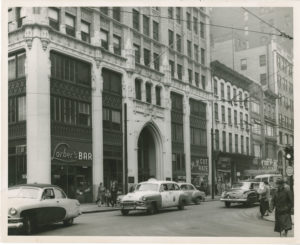 During a five year period, rental costs increased from $22,000 in 1926 to $258,291.16 in 1930. 5   Once Brooklyn College was founded in 1930, the rising enrollment and rent, along with limited and inadequate classroom space, made the need to find a permanent campus imperative.