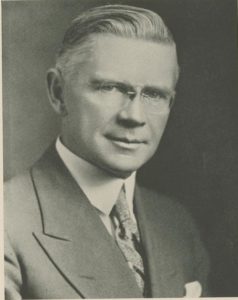 On April 22, 1930 the Board of Higher Education voted to combine the Brooklyn branches of City and Hunter Colleges into the new, co-educational Brooklyn College.  The Board was moving toward the creation of a third college in the municipal system, but this action was accelerated by the introduction of the Downing-Steingut Bill in the NY State Legislature in March, 1930.  Board members as well as the faculty and administrators of Hunter and City were neither informed nor consulted about the legislation beforehand.

The bill was largely viewed by the press as a political move by Mayor Jimmy Walker who hand-picked his former teacher and the current Associate Superintendent of NYC public schools, Dr. William Boylan, to lead the new institution. Under this bill, the Board of Higher Education would have been replaced by a Board of Trustees headed by the Mayor, the Comptroller, and the President of the Board of Alderman. 2

Although the bill failed, William Boylan was still chosen as president and officially assumed his office on May 15, 1930.  His goal: to make Brooklyn College “the finest institution of its kind in the country.” 3   Boylan’s inauguration ceremony would take place two years later at the first Brooklyn College Commencement in 1932.

To ensure the success of the new college, President Boylan’s top priority was to find a permanent site for Brooklyn College.  But until 1937, the college operated out of rented space in the following buildings: 383 Pearl Street, 66 Court Street, 165 Joralemon Street; 120 Lawrence Street; 57 Willoughby Street; and 80 Willoughby Street. In 1930, the college rented space in the First Unitarian Church on Monroe Place for assemblies.  From 1931 until the opening of the Midwood Campus, assemblies took place in the Church of the Pilgrims at 109 Remsen Street. 4 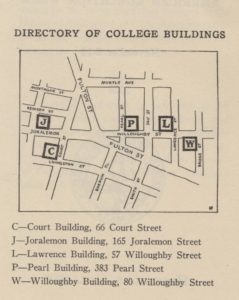 The college may have been co-ed on paper, but it took years for the Hunter and City branches to merge academically.  At the start, the Men’s Division headed by Mario Cosenza and the Women’s Division headed by Adele Bildersee operated independently with their own classes, student councils, clubs, and newspapers.  “In those days Brooklyn College in reality was Hunter College in the Court Street Building and City College in the Willoughby. Pearl Street was common territory, a place where men and women met, stared, glared, and simply kept going.” 5