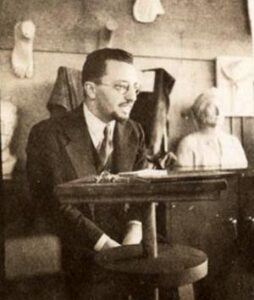 “Mr. Anthony Pugliese of the newly-acquired dark and bristling Van Dyke, practicing more pedagogy than is offered by the Education Department and highly interesting as a lecturer, owing to the possession of a neat sense of humor, concedes that art may carry a purpose; may be seen promenading about the campus on the cold wintry days with cane and spats sans overcoat; deeply interested in psychology probably because of the proximity of the departments.” 1

A faculty member in the Department of Design, Anthony Pugliese began his career at Brooklyn College in 1931, teaching etching, art history, secondary school education, and interior design.   Because of his background in interior design, President William Boylan selected Pugliese to be a part of a group of professors charged with monitoring the construction of the Midwood Campus.  These professors spent months on the construction site, ensuring that the buildings and grounds were built to specification.   In a 1939 interview with the Brooklyn Daily Eagle, Pugliese recalled this experience in vivid detail, stating that he “lived in these buildings before they were up; watched the work and made it go right; checked everything from contracts down, rode trucks ten hours a day.” 2

During this time, Pugliese produced his iconic sketches of the Midwood Campus, capturing both the grandeur of the Georgian buildings and the budding greenery on the east and west quads.  His appreciation of the campus grounds continued once the campus opened. Pugliese often spent his free time tending to the newly planted Brooklyn College trees, shrubs, and flower beds, carefully chosen by Harold Caparn, a renowned landscape architect.3  Biographer Oliver Chamberlain commented on Caparn’s vision stating that for “Almost ten years prior to his engagement at Brooklyn College, Caparn had laid out the landscape of the central quad of Lebanon Valley College as a botanic garden with emphasis on the evolution of trees and shrubs as he had done at the Brooklyn Botanic Garden. At Brooklyn College, however, Caparn pursued a different direction, designing a campus landscape that displayed a broad collection of shrubs and trees in the manner of an arboretum.” 4 Although most of Caparn’s plantings, including the spectacular sunken garden, have been uprooted to make way for new construction, his tranquil lily pond remains.

During World War II, Pugliese, like many BC faculty and staff members, took a leave of absence from teaching and enlisted. He became an instructor in aircraft recognition for the U. S. Army Air Force at Gunter Field, Montgomery, Alabama. He was also named an honorary member of the Armée de l’air Française.  Upon his return to Brooklyn College, he resumed teaching in the Department of Design and assisted the staff at the newly created Brooklyn College Veterans and War Counseling Office. 5 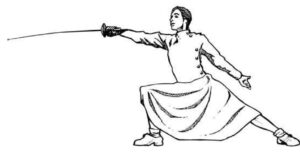 Julia Jones was the model for this drawing which is engraved on the NIWFA medal. Image courtesy of the NIWFA.

A gray clocktower?  In a 1939 interview, Pugliese remarked that “The gray tower of the library reminds you a little of Independence Hall in Philadelphia. The library is the gem of the college; the library is the essential part of the college.” 7   This pen and ink drawing of the Library clock tower appeared on the cover of numerous Brooklyn College publications over the years, including annual reports, directories, and even on a series of printed t-shirts. 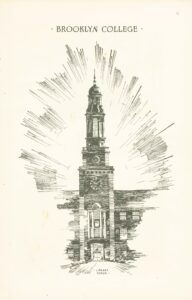 The changing of seasons is particularly beautiful on the Midwood Campus.  Here is a sketch of the Library during a snowy winter. 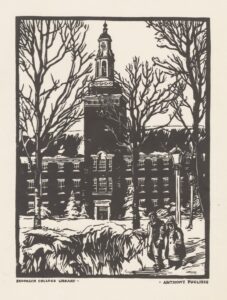 The Library in Winter, circa 1939. Papers of Anthony Pugliese, Brooklyn College Archives.

A photograph found in the BC Archives reveals almost the exact location of this next drawing. 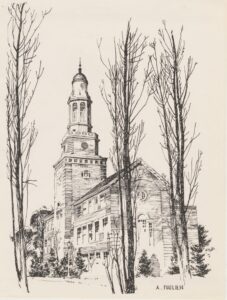 Side View of the Library, circa 1938. Papers of Anthony Pugliese, Brooklyn College Archives. 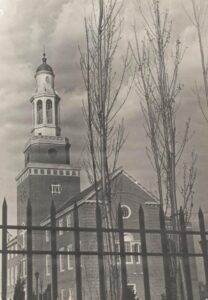 This drawing features WPA workmen constructing the Lily Pond.   The construction of the Midwood Campus would not have been possible without funds from the New Deal.  To read more about the long struggle to find a permanent home for Brooklyn College, see our blog post The Search for a Campus. 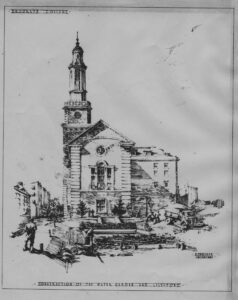 In this late 1930s sketch of the Lily Pond, the newly planted trees and shrubs have yet to create the secluded oasis which exists today. On the right is a 1945 photograph of the pond.  Note both the absence of benches and that Campus Road, which once circled the college, is visible in the background. 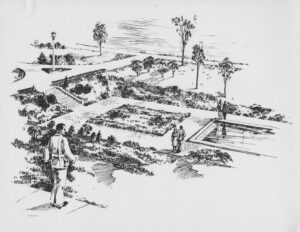 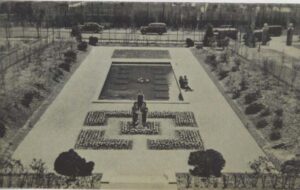 In 1940, the Academic Building was renamed Boylan Hall in honor of Dr. William A.  Boylan, Brooklyn College’s first President. 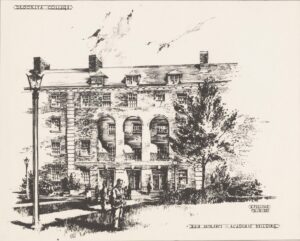 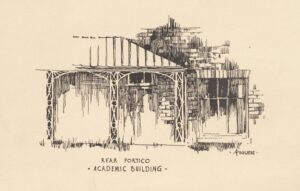 The Greenhouse and the Observatory (Ingersoll Hall)

This sketch celebrated the improvements to scientific study now available at the Midwood Campus.  Students no longer had to take classes in downtown Brooklyn’s cramped, outdated, and ill-equipped labs.  At the same time that the Academic Building was renamed, the Science Building became Ingersoll Hall in honor of Brooklyn Borough President Raymond Ingersoll. 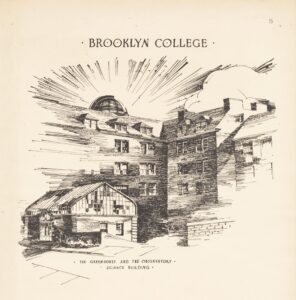 The original Brooklyn College greenhouse was located behind Ingersoll Hall near Campus Road.  It was torn down during the construction of the Ingersoll Extension. 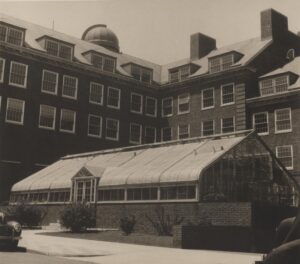 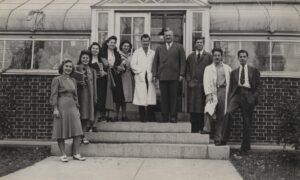 Students and Faculty at the Greenhouse, circa 1940. Greenhouse Manager Herman Becker (wearing a lab coat) and Biology Chair Earl Martin are in the center of the photo. Brooklyn College Photographic Collection, Brooklyn College Archives.

The high-powered telescope in the observatory was in use until 1995.  During the summer of 1994, pigeons entered the dome via a hole in the roof and built nests. By the time the birds were discovered, the telescope was covered in guano. 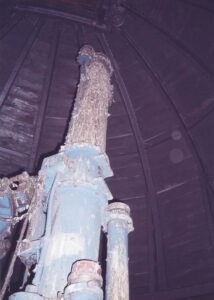 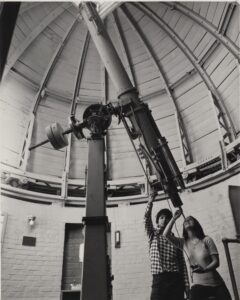 As the Brooklyn College student population grew, the original Library structure quickly became obsolete.  While Pugliese’s design was never used, an extension to the Library was completed in 1959.  In 2002, a newly renovated and expanded Library opened to the public.  For more about the history of the BC Library, check out our blog post from 2016. 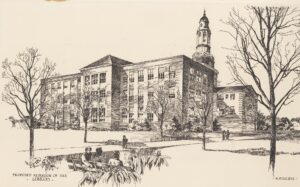 Often proposed but never built, here are two renderings of a concrete stadium for the west quad.  Co-eds made do by cheering on makeshift bleachers or while standing on the sidelines. 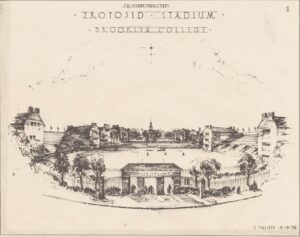 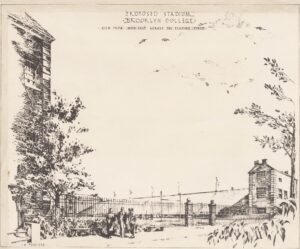 An Overpass for Bedford Avenue

During busy times of the day, all members of the BC Community know how challenging it can be to cross Bedford Avenue.  Contained within Anthony Pugliese’s Papers at the BC Archives are not only his pen and ink drawings but also numerous blueprints for campus plaques and building modifications. Here is a fascinating blueprint detailing Pugliese’s vision for a ramp over Bedford Avenue. 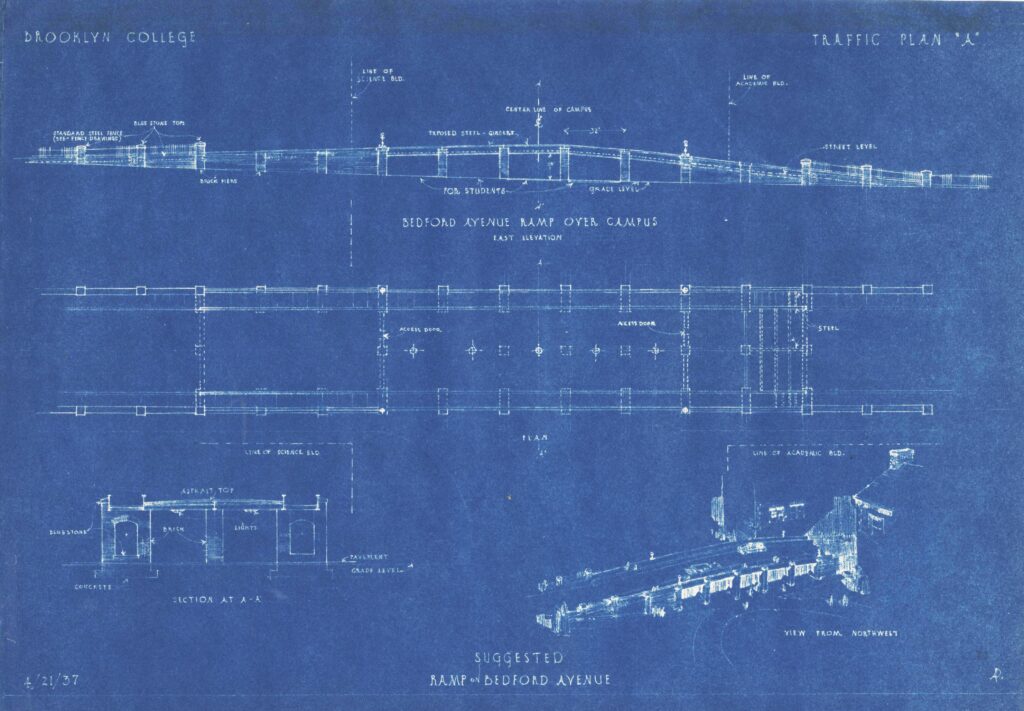 An overpass leading to rooftop seating and greenery was part of the 1973 Plaza Building; the building was demolished in 2003 to make way for the West Quad Building. 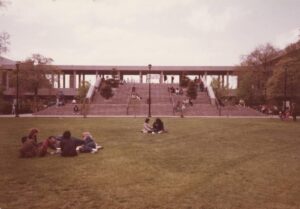 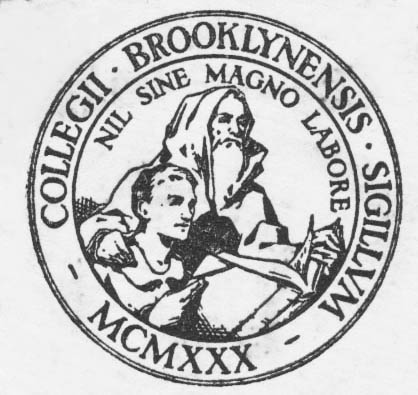 Professor Pugliese worked with Mario Cosenza (the first Provost of Brooklyn College) on the design of the college’s seal. In 1957, Cosenza recalled their collaboration and explained the seal’s symbolism. He wrote, “The old man represents the tradition of the preservation of knowledge and of teaching, both preserved for centuries by the Convents and Schoolmen of the Middle Ages and the Renaissance. The young man is youth eager for knowledge. The tome before them is an ancient folio. The original sketch, however, showed both figures looking down at the volume. I preferred to have them look up – not only because their features would then be more clear, but also because the upward look would mean that all knowledge is a gift from on High.” 8

As the Chair of the Department of Classical Languages, Cosenza chose the school’s motto, nil sine magno labore, which is printed on the seal.  The phrase is from Horace’s Satires, book 1, no 9, verses 59-60. Cosenza explained that although the words are from Horace, the meaning is not the same. “In Horace, this admirable sentiment bears a different outcome. I meant it,— and still mean it, — to be interpreted in the sense that this young generation can attain to nothing worthwhile (a lesson which Euclid taught Ptolemy) except through hard and persistent effort, especially in these days of ‘get-rich-quick’ and ‘what’s the use of studying’ slogans.” 9

The name of the college translated into Latin also appears on the seal, but design constraints affected the wording.  The college’s name should have been inscribed as Sigillum Collegii Brooklynensis. However, the word order was changed to make the name easier to read. In typical Brooklyn College fashion, a small controversy arose over the Latin spelling of Brooklyn. President Boylan received complaints from faculty members who objected to Cosenza’s spelling choice, arguing that the correct spelling was Brooklyniensis. After reviewing the arguments made on both sides, the President agreed with the Provost on this matter. 10

Professor Pugliese was often called upon by the college administration to design maps, charts, and booklets for the college.

This map shows the original campus buildings along with the proposed locations for the auditorium, the stadium, and the student union building. 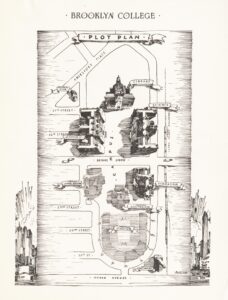 Looking at this beautifully illustrated campus map, you can see how Campus Road originally circled the campus. 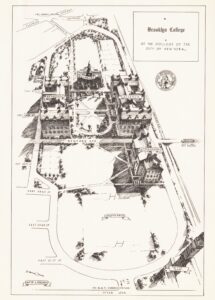 In this drawing, Pugliese illustrated the connection between Brooklyn College, a student’s home life, and the larger community.  President Gideonse used this chart as a visual aid when advocating for increased funding and when promoting the need for an auditorium and student center. 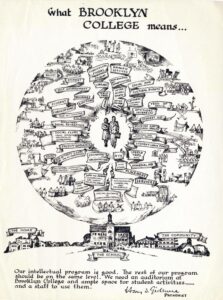 When the Midwood Campus opened in October 1937, every student, faculty, and staff member relied on Pugliese’s pocket-sized directory.  Inside was an inspiring message from President Boylan. It read, “This is your school. It is the realization of a dream.  The style of architecture is typically American and the materials incorporated into its structure have come from all parts of the United States.  The Federal Government and the City have shared in its cost.  We who constitute the faculty and student body of Brooklyn College should enter these halls with a determination to establish here traditions equal to those that distinguish the most worthy American colleges. “ 11 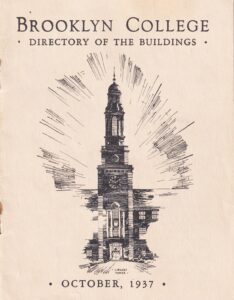