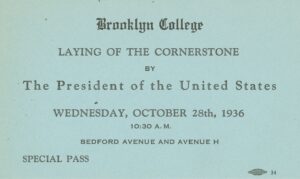 On October 28, 1936, President Franklin D. Roosevelt came to Brooklyn College to lay the cornerstone for the Midwood campus.   It was only fitting that the President was given this honor since construction would not have been possible without New Deal funds. To mark such a momentous occasion in New York City’s history, the day was declared a half-day holiday for the public school children who lined the route of the President’s motorcade as it wound its way to Bedford Avenue and Avenue H.

Early that morning FDR’s train arrived in Bayonne, New Jersey.   After greeting the New Jerseyites assembled near the station, the President’s motorcade, which would eventually total 30 cars, crossed the Bayonne Bridge into Staten Island and then traveled via ferry to the 69th Street Terminal in Brooklyn. At the pier, New York City Mayor Fiorello LaGuardia joined the President, First Lady Eleanor Roosevelt, and New York Governor Herbert Lehman in the Commander in Chief’s car as they made their way to the construction site protected by Secret Service and 2200 policemen stationed along the route.1 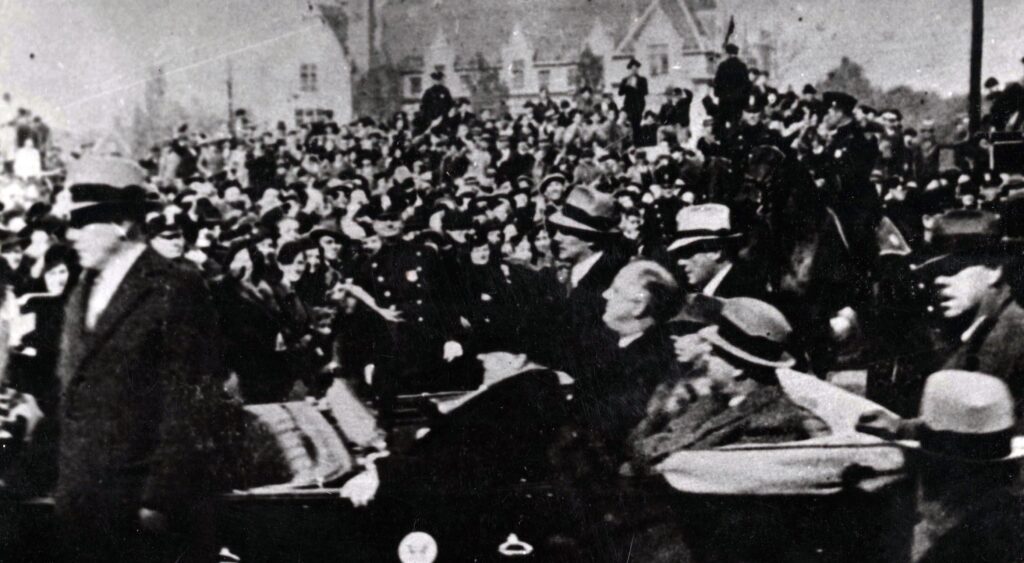 Official ceremonies rarely go off without a hitch.  Travel delays resulted in the motorcade falling about an hour behind schedule.  While the crowd of approximately 6,000 students, faculty, reporters, workman, and public figures awaited the President’s arrival, they enjoyed music played by the Department of Sanitation’s band and listened to impromptu speeches given by officials including BC President William Boylan; the Board of Higher Education Chair Mark Eisner; and alumnus Alfred Giardino.

Every dignitary who addressed the crowd on that celebratory day remarked on the importance of education in a democracy, with many contrasting the construction of a free, public college with the dark cloud of fascism hovering over Europe.   Brooklyn College President William Boylan stated:

The ceremony of the laying of the cornerstone by the President of the United States is symbolic of one of the fundamental cornerstones of our civilization: the union between democracy and education. This municipal college represents the great American principle that education is the salvation of a free people and the great human principle that knowledge is virtue….Democracy and education are united in a common faith. We must save both if we are to save either of them.2

Mr. Eisner’s words echoed those of Dr. Boylan.  After describing the long struggle to find a permanent home for Brooklyn College he declared, “The way of America is not the way of dictatorship and war.  Nay, rather it is the way of truth through universal, free, and liberal education.” Later in the ceremony, he described Brooklyn College as a “citadel for democracy.”3  BC graduate Alfred Giardino, class of 1934, spoke passionately about the importance of making free and equal access to education available to all Americans.  He declared that in both education and democracy, power comes from the people who “discuss, analyze, and decide.” He added, “The attacks against real democracy have been bitter but thus far have been unsuccessful in America. They have been unsuccessful in America because education and democracy are built on the strongest of foundations—government by the people and government for all people.”4

The motorcade arrived shortly after Giardino’s speech. Mayor LaGuardia introduced FDR and led the crowd in three rousing cheers of “Yeah Roosevelt.” According to the Brooklyn Daily Eagle, the crowd “let loose with all the enthusiasm of football rooters over a touchdown.”5  In his speech, President Roosevelt described the building of the campus at a time when the Great Depression gripped the nation: 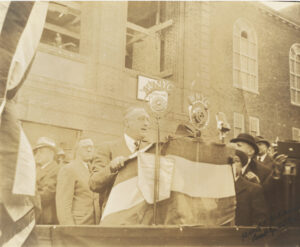 This project for Brooklyn College is killing two birds with one stone. We are not only putting to work, not only have put to work, many thousands of good people who needed work, but we are also improving the educational facilities of this great borough not just for today but for generations to come.

And out of this Depression, while there has been much misery and much suffering, there’s also come much work especially in educational lives. It has given this country an opportunity not only in this city and not only every other city in the country, but in almost every county of the three thousand or more counties in the United States to get better schools for the young people. And so I am very, very keen, very much interested in all of these public works projects which have improved the schools of the nation. I planned to come here today and to wish to Brooklyn College the fine and successful future that it deserves. You here are doing a great work. May it live through the generations to come for the building up of a better American citizenship.6 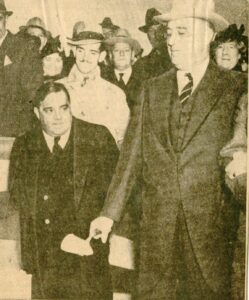 Following his speech, the President used a trowel to spread mortar on the cornerstone of what would become the Gymnasium Building. FDR then sped off in his motorcade to tour the PWA’s Williamsburg Houses and then to Liberty Island for a birthday bash in honor of Lady Liberty’s fiftieth birthday.

On April 14, 1945, two days after FDR’s death, Brooklyn College announced that the Gymnasium Building would be named Roosevelt Hall in his honor.  A plaque dedicated to FDR was unveiled on May 14, 1947, and hangs near a portrait of the President on the first floor of the building.7

The Mystery of the Cornerstone

If you take a stroll around present-day Roosevelt Hall, the cornerstone is nowhere to be found.  The Archives is silent on what happened to this historic piece of Brooklyn College history.  We are calling on all members of the BC Community to help us solve this mystery. Was it removed when the now demolished Plaza Building was built over the East Quad?  Or is it just hidden from view after a renovation project? If you can help us solve this mystery, email us at specialcollections@brooklyn.cuny.edu.  (We are also still looking for the lost portrait of President Boylan.)

Most cornerstones contain a time capsule.  In 2000 Brooklyn College facilities personnel found a time capsule while renovating the Boylan Hall steps.  Once opened, the inventory list inside the rusted metal box revealed that it is was the time capsule for the Gymnasium Building.  Here is another mystery. Was this time capsule originally in the Roosevelt Hall cornerstone? Or did President Boylan and the early administrators change their minds as to where they should place it, but never updated the inventory list to reflect the new location?

The Brooklyn College Time Capsule, now housed in our Archives, contains a fascinating array of documents and ephemera celebrating the construction of the Midwood Campus. Below is a small selection of items found inside.